Quatermass and the Daemons 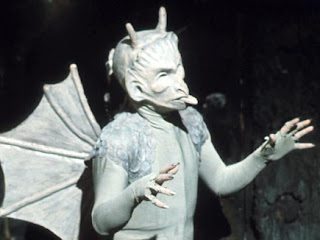 Bit of a Nigel Kneale fix over the weekend.  Finished reading The Twilight Language of Nigel Kneale with contributions from amongst others Sukhdev Sandhu, Roger Luckhurst, Mark Fisher and China Mieville- recommended.  Dr David Pike who wrote an interesting book with a very similar title to mine observes:

Since the nineteenth century, representations of underground space have tended to split into two forms; an organic, mythic and mostly negative underworld associated with hell and the devil and an inorganic, technologically-based and mostly positive underground purged of associations with the other form.  Kneale's are not the only representations to explore the interactions of the two undergrounds, but they are some of the most conscious and thoroughgoing of them, especially during the post-war years when what I call the 'bunker fantasy' - belief in the capacity of a buried concrete pillbox to preserve and improve modern society - was the dominant spatial ideology.'

Also watched the Dr Who series The Daemons which I hadn't seen for over 40 years and hasn't been available on DVD until fairly recently.  First broadcast in 1971 it had a great impact on my young mind, especially the scary demon that's evoked in the church crypt (not the silly Bez-like gargoyle).  It didn't disappoint, but I could now see the very obvious debt it owed to my favourite film Quatermass and the Pit.  Such as?...oh, how about: an alien spaceship that's lain buried for thousands of years until it's uncovered by a team of archaeologists and starts to cause havoc locally; the aliens have visited Earth every now and then to influence world events (Renaissance, Industrial Revolution etc); their appearance inspired images of the Devil throughout history; they can be repelled by iron etc.

Roger Delgado's Master plays a Crowleyesque role as a bogus priest : 'Do my will shall be the whole of the Law' he utters on a couple of occasions and attempts to placate the demon by preparing hippy chick assistant Jo Grant for the sacrificial altar in the rather unsatisfying conclusion.  Filmed in the Wiltshire village of Aldbourne (called 'Devil's End, another QATP reference) the pub is renamed the Cloven Hoof and all kinds of diabolical destinations are indicated on local road signs.  All this and some malevolent Morris Dancers.  Well worth watching.
Posted by Antony Clayton at Wednesday, March 27, 2013