The Many Hauntings of Burton Agnes Hall 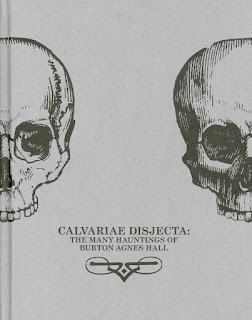 A recent read has been Calvariae Disjecta: The Many Hauntings of Burton Agnes Hall (Information as Material, 2017) edited by Robert Williams and Hilmar Schaefer.  I've complained in this blog before about the sloppy nature of the vast majority of 'non-fiction' ghost books that repeat earlier versions of the same story without doing any basic research and sometimes weave new details into the embroidery.  The idea of this book is to take all the extant narratives of one ghost story and put them in chronological order so that the reader can see the way in the which the basic text is transformed and enlarged in the retelling, with tropes from other pieces of ghostly folklore interpolated as the legend evolves.  In this instance it is the story of the so-called 'Screaming Skull' of Burton Agnes Hall in East Yorkshire.  The earliest account traced thus far was printed in The Folklore Journal of November 1880 and the narrative is followed all the way up to paranormal sites on the internet.  It makes fascinating reading.  Review by Phil Baker in the TLS here.

At its simplest, the narrative concerns a daughter of the hall's owners who was fatally attacked by robbers - before she died she requested that her head be kept in the house; her family instead buried her whole body in the local church (or churchyard) and subsequently all kinds of ghostly goings on occurred until the grave was opened and her (by that time desiccated) skull taken into the house.  If it was ever removed for any reason the supernatural outbreaks recurred.   I found it amusing to see how details were added or mangled so that, for example, in one much later account the name of the family involved changes from Griffith to Griffin and clanking chains are introduced for the first time.  The funniest must be the accounts of the skull rolling out of the house and bowling itself at skittles.

In many versions a maid unwittingly throws the skull from a window where it lands in a passing manure cart (later a cabbage cart) pulled by horses (or donkeys) that refuse to move until the skull is removed.  By coincidence, this week I was reading Supernatural Peak District by David Clarke which has a chapter on skulls and stone heads - lo and behold there is exactly the same story attached to Flagg Hall in Derbyshire.

Apparently the Burton Agnes skull was walled up somewhere in the house at some point in the early twentieth century.  The book is not so much a folklore study as an art project and also contains a dialogue between the editors and a section of various photographs of the skull motif.  The photos of the skull-encrusted tomb in the local church certainly make one wonder whether the origins of the story might lie there.
Posted by Antony Clayton at Wednesday, September 20, 2017