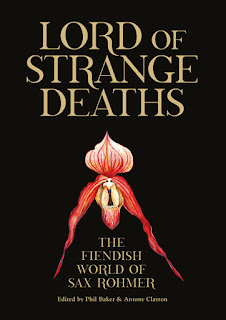 It would appear that the much-delayed Lord of Strange Deaths, which I co-edited with Phil Baker (in case everyone's forgotten, it's about Sax Rohmer and amongst other things his most famous/notorious creation Fu Manchu) will emerge from the printer on the same day at the end of this month as Secret Tunnels of England, a rather bizarre coincidence that will mark the culmination of three years' work.  Available from Strange Attractor - I'm hoping to have a few copies to sell on my promotional travels, but we shall see.
Posted by Antony Clayton at Sunday, September 20, 2015