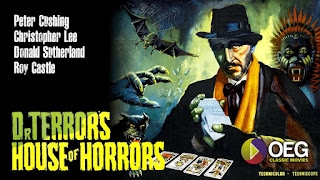 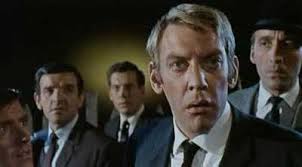 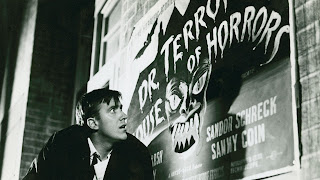 Watched Dr Terror's House of Horrors last week, an Amicus portmanteau film, released in 1965.  The blu-ray has an interesting documentary with comments by, amongst others, Reece Shearsmith and horror film expert Jonathan Rigby.  Reckoned by some to be a classic of the genre, I found it watchable if a bit overlong, with a few moments to savour.  My favourite portmanteau film remains Dead of Night.

When five men enter the same railway carriage compartment they are joined at the last minute by Dr Schreck (Peter Cushing) with his pack of tarot cards who proceeds to tell their fortunes to pass the journey.  Needless to say, the future doesn't look good for any of them.  The segments involve a Scottish werewolf, a Triffid-like killer plant, a voodoo curse, a vengeful disembodied hand and finally a vampire.

The main interest of the film lies in the amazing cast: Cushing, Christopher Lee, an early appearance by Donald Sutherland, Michael Gough, Bernard Lee, Isla Blair and, er, Roy Castle and Alan (Brentford Nylons) Freeman (although on the plus side, I listened religiously to his 1970s Saturday afternoon show and even had a request played).  For me, the best section (and performance) is the one with Christopher Lee as a pompous and acerbic art critic who ends up mutilating an artist before dire revenge is exacted.  The story where Roy Castle plays a jazz musician who borrows from the music accompanying a voodoo ceremony in Haiti was not as terrible as I'd been led to believe: it also includes an appearance by the renowned Tubby Hayes (often claimed to be the greatest jazzman Britain has produced, a recent doc on him available from here) and his quintet and Kenny Lynch, a notable songwriter who was a permanent fixture on 60s telly.  Castle's West Indian accent has to be heard to be believed.  There's also a very pomo moment (poment?) when Castle collides with a dustbin beneath a poster advertising the very film that he's appearing in (although it features the names of the characters rather than the actors).  The film's final twist implies that they have avoided their awful fates, but at what cost?

Review from The Guardian taken from Rigby's excellent English Gothic, the film: '...is a kind of rehash of Dead of Night...One or two of the episodes are really quite ingenious, and bits are well handled by director Freddie Francis.  Although the generally ridiculous dialogue takes away some of the horror, it does give you something to chortle over while you get through the sticky bits.'

The film inspired a purchase of Dr Terrible's House of Horrible, a series of parodies of Hammer/Amicus films with Steve Coogan, which on second viewing is still not particularly funny, but is well observed and worth it if only for his impression of Peter Wyngarde's voice.  Coogan and Matt Berry have certainly nailed those strangely-accented macho male voices that frequently cropped up (often dubbed) in 1970s thriller and adventure films and television.  I should point out that there's a Fu Manchu parody called Frenzy of Tongs starring Mark Gatiss as a sinister robed oriental with a distinctive moustache.  Probably also drawing on the Hammer film The Terror of the Tongs (1961), also starring Christopher Lee, which I must get round to seeing one day.