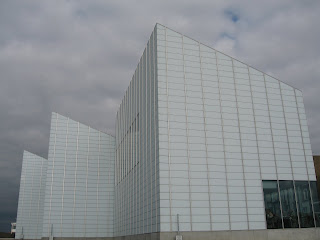 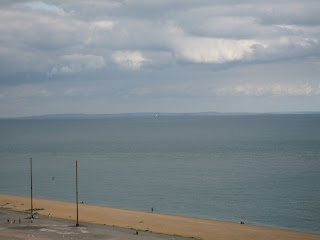 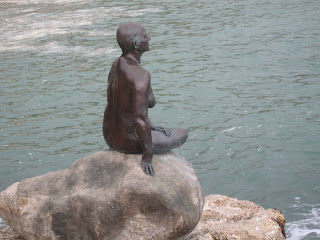 Last week we camped for a couple of days at Little Switzerland just outside Folkestone. The weather and light conditions were such that France seemed a short swim away - see my photo above including the artwork Out of Tune by A K Dolven, a suspended bell on the shore that could be rung; although when we went to make it chime in the evening it was 'closed' - presumably so that people living nearby aren't kept up at night.

We were there on an Art Trip to investigate the Folkestone Triennial and nearby towns. Favourite works: Huw Locke's suspended model boats in the church, Cornelia Parker's Mermaid (my photo above), Towards the Sound of Wilderness where Cristina Iglesias created a window onto an almost unrecognisable Martello Tower completely covered in vegetation, and a video installation in a Masonic Hall by Olivia Plender, although the setting was more impressive than the work - Martin Creed's 'soundwork' in the Leas lift wasn't working. Tried to get into the GHost House (not officially on the list) but it was closed.

Also went to the Turner Gallery in Margate - impressive building but the acres of space inside had very little to fill them - the work that impressed me most was by Russell Crotty, a series of globes, maps, documents and starcharts. Hastings' own contribution to hopelessly optimistic 'regeneration through art', the Jerwood Gallery, has announced that as works are running a little behind schedule it will not be opening this summer - too late anyway - but next summer instead - not a good sign. Again, however good the building, is there any interesting art to put in it? I feel it should have been placed somewhere in the New Town - there's plenty of empty shops and a warehouse-like empty newspaper office - rather than in the already crowded area at the beach end of the Old Town.

Another interesting place was Morelli's ice cream parlour and cafe in Broadstairs - apparently pretty much unchanged since the 1950s.
Posted by Antony Clayton at Monday, September 05, 2011