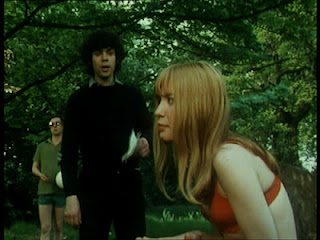 Just finished watching The Owl Service on DVD - how this could have been shown on children's television seems inexplicable these days, with its very adult subject matter. I found parts of it quite disturbing and I'm still not sure if I actually understood it - no wonder Granada included a resume at the start of each installment telling you information that hadn't in fact been made clear in the previous episodes! Based on the book by once-popular author Alan Garner (I asked for it in East Sussex libraries and they don't have a single copy)it tells the story of a recurring piece of Welsh folklore and its effects on two boys and a girl in their late teens. The girl is played by Gillian Hills, a bit of a cult star, with a career in French pop and parts in A Clockwork Orange and Blow Up (now married to the manager of AC/DC apparently).

There are some amazing camera angles in the earlier episodes that make parts of it fairly avant garde and a scene at the end that prefigures The Exorcist. It's one of those productions that is supposedly 'cursed' and I was very upset to read that Michael Holden who played the Welsh boy Gywn (not a great performance but he showed promise) was beaten to death by two louts in the Rose & Crown pub, just off Piccadilly (mentioned in my Folklore of London) in an unprovoked attack in September 1977. Talking of cult early 1970s television - Found Objects (see list opposite) has a link to Penda's Fen mentioned in an earlier post (Old Weird Britain) - at last I (and you, dear reader) have a chance to see it in its entirety.
Posted by Antony Clayton at Thursday, May 10, 2012