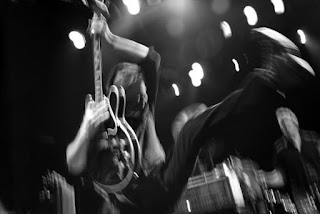 To Koko in Camden Town last week, at the suggestion of Haunted Shoreline, to witness Swans in concert.  This was my fourth encounter (for the first, see post for May 2010) and many years had passed between this and the previous occasion, when I thought they were a bit restrained, with too many acoustic guitars in evidence.  No fear of that tonight, as I'd heard that they'd returned to being loud again, a statement that had me going to this gig with some trepidation, as I knew from experience what that would entail.

After a relatively restrained start the volume increased rapidly until after about half an hour I decided it was time for the ear plugs - even with them in it still seemed incredibly loud.  I had gone to one of the My Bloody Valentine reunion shows at the Roundhouse where staff were handing out earplugs but I soon took mine out as I couldn't hear the music properly - Swans were definitely a whole lot more than 1 louder.

This was sound that pummels you into submission, ritualised violence, that actually results in a kind of tranquility after a while; fortunately most of the noise was in the lower registers with no sudden squalls of ear-splitting feedback, so it could be coped with, just about.  The set length was also challenging, the kind of time taken by Bruce Springsteen or Led Zeppelin at Earls Court, clocking in at almost three hours, with one central 'song' lasting an entire hour it seemed.  A thrilling section marked a return to the Swans of old with one crashing chord being repeatedly played in unison, Michael Gira leaping like Pete Townshend across the stage and then running back to starting position to do it again - this went on for at least 10 minutes, probably a lot longer.

Nice to see a younger crowd than that which attends most shows I go to these days and I was also amused to hear Gira refer at the end to their first London concert supporting The Fall at Heaven (where I was one of the few who dared leave the upstairs bar to see them), remarking,'I sure made a lot of use of the glory holes there that night' - what could he mean?  There's a suitably pretentious review here and more straightforward ones here and here.
Posted by Antony Clayton at Monday, November 19, 2012