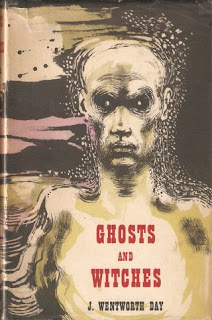 'Spinney has several ghosts.  No place is better fitted for them.  Founded by Lady Mary  Bassingbourne, 'of the Wykes', in the twelfth or thirteenth century, it was a lonely outpost of the Augustinian Canons, standing grey and grim, enisled amid reefy leagues of fen and mere.  A bare wind-twisted belt of scrubby firs was all that protected it from the wild nor'easters that howled down on the wings of the frost and battered its doors, rattled its windows, and beat flat the winter reeds in the great fish-stews.

They lived a good life, those old monks - asceticism offset by old wine and the best that the Fen netsmen and decoymen could bring as tribute.  It was too good to last.  When Henry VIII fell upon them Spinney suffered with the rest.  That is how the first ghosts began their earthly span.

The legend is that when Henry's men-at-arms marched on Spinney, the monks fled in terror down the subterranean passage which is supposed to connect the Abbey with Denny Abbey, five miles across the fens, on the other side of the Cam.  They took with them the plate and all else moveable of value.  Half-way down the tunnel they met the monks of Denny, who also had been turned out by Henry's ruffians.  They decided that it was better to yield up the holy treasures and be saved than perish and be glorified.  So they trotted back to Spinney.  There they found the Abbey wrecked and cast down, and tons of debris over the door to the outer world.  The same had happened at Denny.

Thus the monks expatiated their carnal backslidings by dying in that nightmare tunnel.  Some of my family tried to explore the tunnel fifty years or more ago, but it was full of water and noisome gases.'

He goes on to say that a later owner of the house, built on the cellars of the priory, was troubled by tapping under the floor (said to be the ghosts of the monks tapping on the roof of the tunnel).  'At other times footsteps have been heard and horrible sliding, serpentine rustles, as of gigantic snakes slipping about on the brick steps.  Water fills the tunnel to within a few steps of the top. it is extremely probable that the river has broken in at some time and flooded the passage.  This belief has given rise to stories that the tunnel is inhabited by great eels, which accounts for the "slippery ghosts".'  He also reports that workmen digging on the fens 'found the arched brick roof of a tunnel which seemed to run in a straight line between the two abbeys.  The men got down to gault before they struck the roof, so it is possible that the tunnel might have been driven through the sticky tenacious gault with little fear of inundation from the marshes above.  Gault is impervious to water.'

A more prosaic history of the Priory of Spinney can be found here and some information on the subsequent history here.  One important feature of such tunnel legends, common after the Dissolution, was that they reinforced the official propaganda of the 'carnal backslidings' of the monks, as Wentworth Day puts it.
Posted by Antony Clayton at Thursday, September 19, 2013