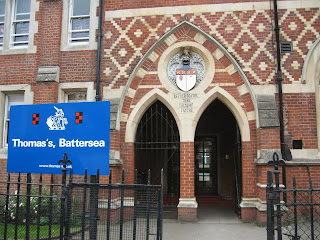 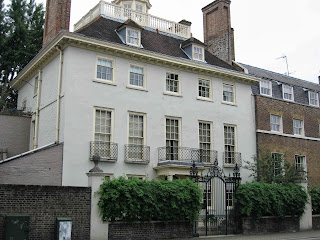 Each year my enthusiasm for London Open House declines (too many crowds and queues and public transport in London is far more crowded than it was when I lived there) but I still manage to drag myself around a handful of places.  This year I decided to stick south of the river.  My plan to visit Battersea Power Station was stymied by meeting someone who'd just passed the massive queues, so I decided instead to revisit some old haunts (from the outside - they weren't part of Open House) namely my old school Sir Walter St John's in Battersea High Street.  Buildings still there, but no longer a state grammar school.  Hard to believe now but round the corner, at what was then called Devonshire House, we had our sixth form common room and various beautiful wood-panelled chambers at our disposal for tuition - now in private hands of course and probably worth millions.  The queue to view the house next to the old school was too long so I wandered off to the De Morgan Centre in Wandsworth.  The collection there used to be housed in Old Battersea House owned by the Forbes Foundation - in the mid-1980s they allowed me inside to see their considerable cache of Evelyn de Morgan paintings as part of the research for my thesis on the influence of Florentine painting on Edward Burne Jones and his followers.  Nice to see them once again - bottom pic Flora by Evelyn de Morgan.
Posted by Antony Clayton at Monday, September 23, 2013