Coffee Houses and Catching Up 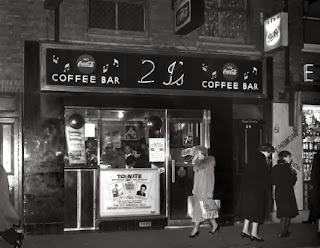 Andy Sharp, English Heretic, who shares many of my interests and contributed to the Netherwood book, is interviewed at The Quietus.   Anti-Heroes was one of their albums of 2013 - check it out.

During Soho investigations for next month's Burroughs walk I was shocked to discover that the green plaque formerly on the front of 59 Old Compton Street marking the birthplace of British rock'n'roll - the 2i's coffee bar - is no longer there.  I was present on 18th September 2006 when the plaque was unveiled - all sorts of early rock royalty was there - various Shadows and Skifflers.  I met Big Jim Sullivan and chatted with Cliff Richard, who, whatever you may think of him, was a gentleman throughout the event, signing stuff thrust at him by fans outside and unfailingly unruffled.  He graciously accepted a copy of my coffee house book - I wonder if he still has it?  The wine bar that was there at the time has gone, to be replaced by The House of Ho, a fashionable eaterie.  I do hope the removal is temporary.  [By mid-April the plaque had returned].  If not, it may be time for a petition.  Walker's Court, home of sex shops and the Raymond Revue Bar, just around the corner from Burroughs' 'portal doorway' in Peter Street, Soho (now site of a hideous replacement) has been given the green light by Westminster City Council for redevelopment - another local landmark erased (popular for band publicity shots - Felt spring to mind).

Yet another Underground London talk this time at the new Artizan Street Library in the City of London.

I'm not sure what's happening with the Sax Rohmer/Fu Manchu book now that the centenary has passed - it will be out sometime in the next few months I imagine.  It's out of my hands I'm afraid.  All future projects will appear under my own Accumulator imprint.  One of the contributors to the Fu Manchu book, Alan Moore, has an interesting (last?) interview here.  I can certainly sympathize with his reluctance to do public appearances in the future.