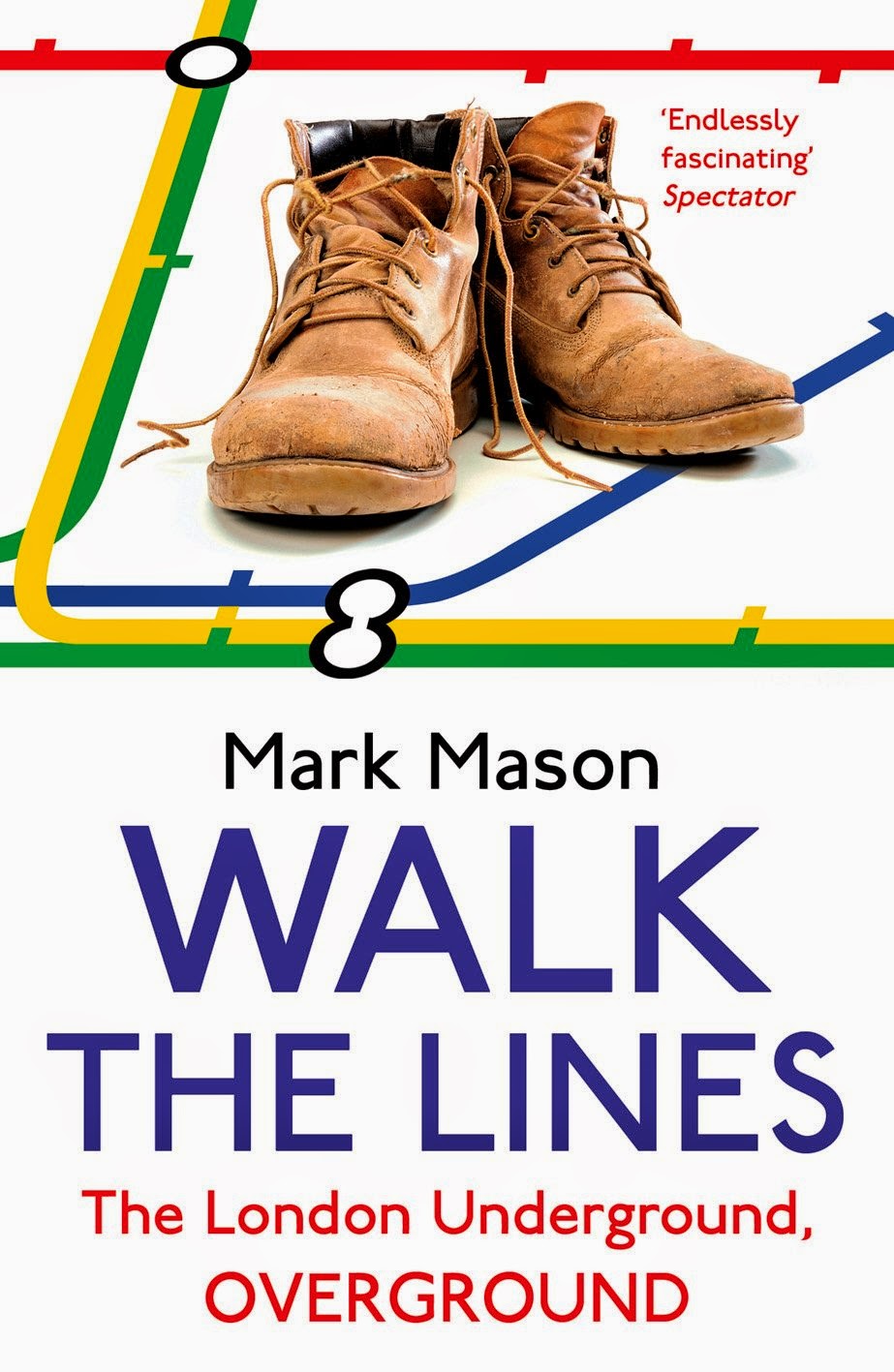 Having just navigated my way through Bryan Magee's wonderfully lucid and readable The Philosophy of Schopenhauer (five star reviews here justified), of which more anon, I felt in need of some light relief, so I borrowed Walk the Lines, the London Underground, Overground by Mark Mason.

From June to December 2010 the author decided to follow the 250 miles (402 km) of London underground line, passing all 270 stations, above ground - of course 55% of the network is above ground anyway.  This is the kind of eccentric journey memorably parodied many years ago in the Ripping Yarns episode Across the Andes by Frog.  Mason succeeds in his task although one stretch of the Piccadilly line at Heathrow proves unwalkable and he reluctantly has to take the bus.

Sadly this book was never as interesting as I was hoping it might be.  The absolute antithesis of the type of psychogeographical walking popularized by Iain Sinclair, it suffers considerably in comparison with say my favourite examples Lights Out for the Territory and London Orbital (the latter a similarly masochistic undertaking), both much better written and more magical, containing moments of real insight, with some brilliant descriptions and feeling for place.  I got the impression from Mason's book that he'd become weary with his mission pretty early on and just wanted to get it out of the way - you can admire his stamina, but all too often very little is revealed about the many parts of London he passes through.

Too many times whole sweeps of London are dispensed with in a sentence and you long for more, especially the parts that are rarely written about.  Admittedly some of these areas on the edge of the city are dull, but someone like Iain Sinclair can usually find some snippet of fascinating history or link with a writer, rather than trot out pub quiz trivia, as happens frequently here.   The book is partially redeemed by some of the humorous comments and by the encounters with characters such as the woman taxi driver learning the Knowledge, biographer John Pearson and especially Bill Drummond, a man always full of unusual ideas (I heartily recommend his book 45), the latter showing up the shallowness of much that has gone before; without these interludes it's pretty thin gruel.

The idea of walking the Jubilee line at night might sound interesting, but it means that there's even less to see and comment on than in the other daylight walks - similarly walking the Metropolitan in the snow just before Christmas leaves you longing for a Betjeman to do it justice.   On the whole it was an undemanding relaxing read, but I couldn't help but feel pretty disappointed by the time I'd finished.  Oh, and the shop he passes in Charing Cross Road is not called "Let's fill this town with artists' but Cass Art -it's been an art shop for over 100 years - now that is worth mentioning.  Maybe I'm being a bit harsh - the book is very readable and I'm sure many will enjoy it,

Apropos books written by London explorers I was reminded in a lengthy pub conversation a few weeks ago with Matt from the excellent Londonist to read Scarp by Nick Papadimitriou.  I used to listen to Nick's broadcasts on Resonance and had made a mental note to buy the book, but as often happens, other distractions intervened - I have to admit I read very few London books these days but I shall try to get round to that one this year.