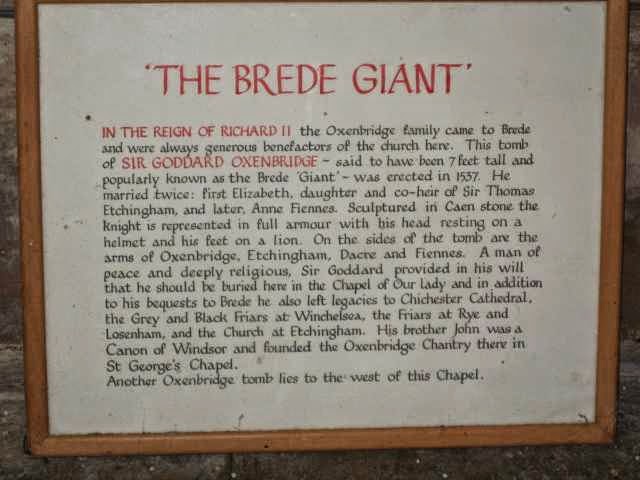 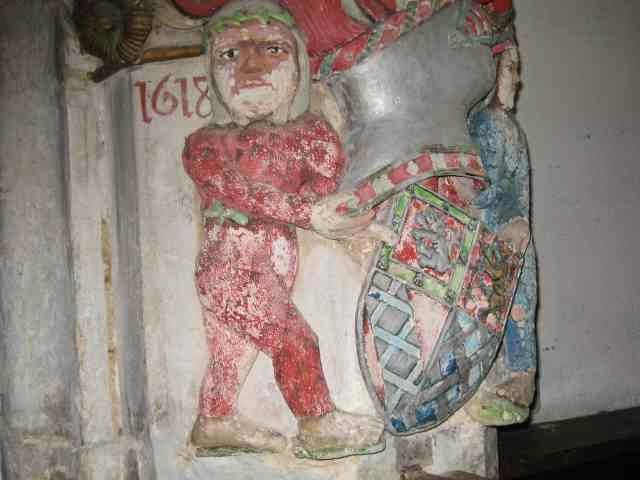 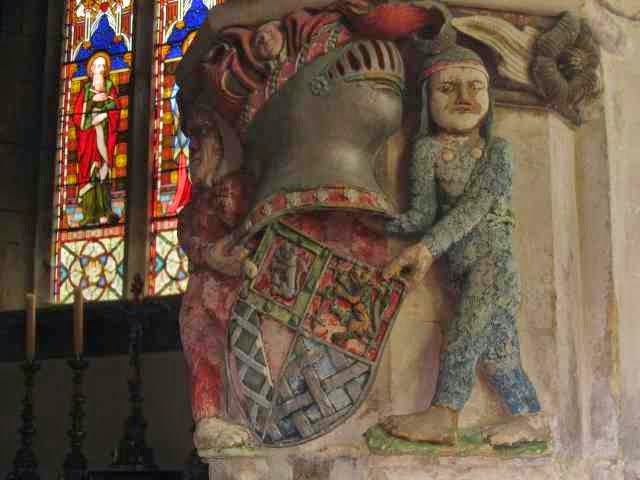 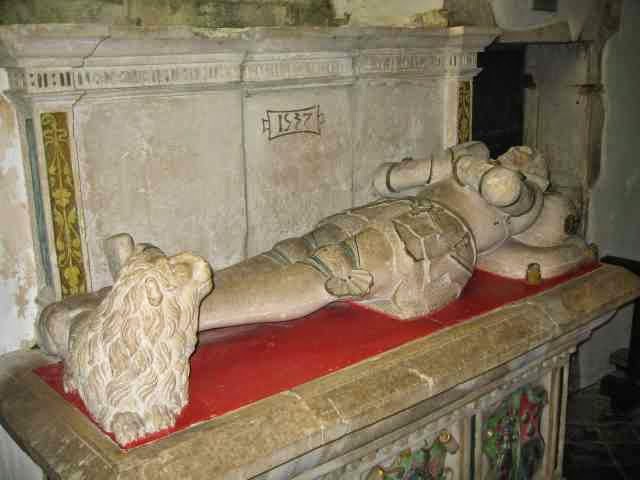 To Brede earlier this week, just a few miles outside Hastings, to do a little bit of research into a local legend.  The lovely church of St George's is a fascinating place to visit and contains in the Lady Chapel a recumbent monument to a local worthy from a noble family residing at nearby Brede Place.

Sir Goddard Oxenbridge of Brede (d.1537) in local legend has been transformed into a fearsome giant who roamed the countryside, carrying off children to devour them.  Jacqueline Simpson in her Folklore of Sussex tells us more (pp.29-30):

'Nobody could get at him to kill him, partly because of his great strength, and partly because a crow which was his familiar, always brought him warning.  Moreover, he was proof against all normal weapons, though it had been foretold that a wooden saw would be his death.  Meanwhile he was still unharmed and every day he ate one child for supper.

So at length, all the children of Sussex gathered together, and in great secrecy they brewed an enormous vat of beer (a drink previously unknown in the district), and fashioned a huge wooden saw.  They brought the vat to Groaning Bridge, at the entrance to Brede Park, where Sir Goddard could not fail to see it, and they lay in ambush near the bridge.  Sure enough, the giant saw the beer, smelled it and began to drink; in next to no time he had drained the vat, and was lying helplessly drunk on the bridge.  Then the children brought out their saw and laid it across him , as if across a fallen free.  Those from East Sussex rode on one end of it, and those from West Sussex upon the other, and so they sawed Sir Goddard Oxenbridge in half.  Long afterwards, his ghost was still said to haunt both the house and the bridge, in the form of a severed trunk.'

According to the church's guide book Sir Goddard 'is reputed to have been a man of unusually large stature' and is remembered locally as 'The Brede Giant'  In the 19th century the local pottery even produced plaques portraying the "Brede Ogre"'.  However, it regards this gruesome story as a 'monstrous calumny on a pious and generous benefactor.'  Simpson suggests that the reason for this hostile depiction was that Sir Goddard, together with other Sussex ogres and cannibals (such as 'Wild Darrell' of Scotney Castle) were Roman Catholics and that 'these legends reflect the deep religious and political hatreds of the sixteenth and seventeenth centuries' and I would tend to agree.  More here.

Reading old guidebooks it's clear that Brede Place had a beautiful interior and was open to the public.  Sadly a serious fire in 1979 resulted in it's rebuilding and closure to visitors.  In earlier days one visitor was the playwright J M Barrie who is said to have based the character of Captain Hook in Peter Pan on a rector of the church (1841-1851) John William Maher, who had travelled extensively and was reputed to have been associated with pirates.

More from the guidebook: 'On the east side of the early sixteenth century oak screen that separates the Lady Chapel from the chancel is a stone capital bearing a version of the arms of Sir Goddard Oxenbridge, irregularly quartered with those of his wife Elizabeth nee Echingham.  The outsize 'supporters' portray a man of the woods and his wife both clothed in skins.  As well as the heraldic shield, they also hold up a typical early 16th century helm; the small head, half concealed by the mantling, is popularly thought to be the woodfolk's baby.'  These figures were repainted c.1980.  All photos by me.
Posted by Antony Clayton at Thursday, September 04, 2014