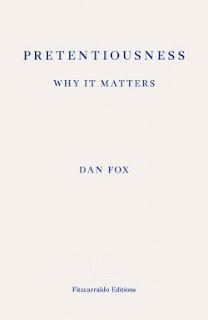 Dan Fox  Pretentiousness Why It Matters

[p.128]  'It is axiomatic that pretentiousness makes no one look good.  But pretension is measured using prejudiced metrics.  The baselines against which authenticity and pretentiousness are calibrated vary wildly.  Anti-pretension critics conscript words such as "logic, "reason" and "the facts" to make their assessments look objective.  The accuser of pretension - naturally thinking themselves to be the real deal, in possession of an educated and discerning mind - believes that somewhere else in the world there is a genuine article that the pretentious thing or person aspires to be, but is falling short of or exaggerating it.'  Very good book - I'm glad he seems to like the record,  but it's The Lamb Lies Down on Broadway.  A review here.

Robert Wood   The Widow of Borley

A return to the rectory (still cannot exorcise it).  Another essential book to understand the full story.  Reminds me of the commentator on the case who concluded it was 'a house of cards built from a pack of lies.'

Eric Ambler The Mask of Dimitrios

An excellent example of the early thriller and still relevant.

Deighton is a great writer, his 'Harry Palmer' books (although the protagonist was only given a name for the Michael Caine films) are very atmospheric of the Cold War, if rather convoluted;  Billion-Dollar Brain is extremely good and there are some lovely witty moments;  SS-GB, a counterfactual history similar to Robert Harris' Fatherland and Philip K Dick's Man in the High Castle (both of which I've read) wasn't wholly convincing I thought, but was certainly a page-turner.  Now I read that it's to be a BBC series shortly starring Sam (Ian Curtis) Riley.

Harold Pinter  The Birthday Party,  The Room, The Caretaker
Tom Stoppard  After Magritte, The Real Inspector Hound, Dirty Linen/New-Found-Land
Alan Ayckbourn The Crafty Art of Playmaking
In my early twenties I fancied myself as a playwright and never wrote a word.  This month I've just embarked upon writing one.  A fun exercise, even if it never sees the light of day.  As I rarely get the chance to go to the theatre I'm doing some homework.  I did, however, get to see The Truth at Wyndham's Theatre in London recently and really enjoyed it.  Written by fashionable French wunderkind Florian Zeller, it was in the tradition of French farce but beautifully acted and all over in an hour and a half without an interval.  One of the very few occasions when I wished a play was longer.