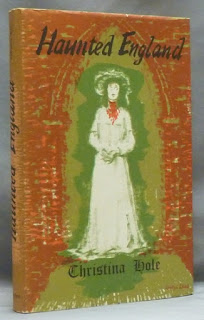 I think it would be fair to say that most books about 'real-life' ghosts and haunted houses are very poorly researched, relying principally on all the previous books talking about the same haunts, which are based on earlier books ad infinitum, rather than a bit of hard-headed consideration and analysis.  It only takes someone to introduce some spurious event into their account for it to be repeated unquestioningly in many subsequent works (of course this has been much magnified by the internet, where you can now find hundreds of copies of mistaken information widely disseminated).

I thought I'd sample one of my small collection of British ghost books (mostly collected for the illustrations) to see what they have to say about Borley Rectory.  Here's an extract from Haunted England (p.179) by Christina Hole, a popular folklorist (more on her here) with my comments:

'Who or what haunted Borley Rectory in Essex is still uncertain even after ten years' intensive investigation by Harry Price and a band of trained assistants. [Price visited Borley on only a handful of occasions and his observers during his year of tenancy (1937-8) were deliberately selected by him for their lack of training in investigating supernatural or paranormal phenomena].  This house was built in 1863 on the traditional site of a fourteenth-century monastery [no evidence has ever been uncovered that a religious house stood on the site].  Notwithstanding its modernity, it seems from the first to have been a sort of storm-centre for manifestations of all kinds.  A nun was constantly [??]  seen in the garden, sometimes in daylight.  On one occasion, a black coach drove into the farmyard and disappeared there [more than one report of this, although some are ambiguous and may merely have been a misidentification of a car at night].  Inside the house noises of all sorts were heard, and objects were hurled about in a manner suggesting the presence of a poltergeist.  After Harry Bull, the builder, died in 1892, his ghost appeared there, as well as other unidentified spirits, including a girl in a blue dress .

The most notable manifestations, perhaps, were messages asking for help, masses and prayers [light mass and prayers - title of a track by Porcupine Tree I have since discovered] which appeared on the walls and on scraps of paper during Harry Price's tenancy [the most important of the dubious wall writings first appeared during the Foyster incumbency 1930-35, some were also alleged to have been found during Price's tenancy, but one visitor accused Price of making them.]  These apparently emanated from a spirit named Marianne who may or may not have been the ghostly nun [at that point Marianne Foyster, wife of the rector Lionel was very much alive - Hole probably means the supposed spirit of a murdered 17c nun calling herself Marie Lairre, who appeared in a series of seances].  The phenomena continued until 1939 when the house was burnt down, and some, including an appearance by the girl in blue, persisted even after its destruction...The study of ghost lore suggests that some places are nearer the edge of the spiritual world than others; and here, perhaps, lies the only explanation yet available of Borley's curious history [the only explanation?  Not that the 'phenomena' may have been misperceptions, hallucinations, or outright fraud and fakery?]