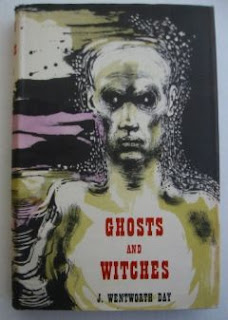 Another character who has appeared in these pages before was also briefly involved with Borley Rectory.  For insight into the true nature of this ardent patriot, sportsman and naturalist with a 'love of old houses and old traditions' see this interview by our friend Dan Farson.  Maybe it should be shown on one of those current tv shows where stand-up comedians sit smugly open-mouthed at the appalling nature of much of the old telly, although it's probably too offensive even for that.  Wentworth Day's prose is almost beyond parody, for example the chapter from which this extract is taken begins:

'There died on Monday, March 9th, 1936, an old friend whom I mourn.  He was a man unique - the best storyteller and the best cricketer, one of the best shots and, after Sir Adrian Carton de Wiart [who he?], the most picturesque soldier of his world and time - Lieutenant-Colonel Cyril Foley.'  [Here are] Ghosts and Witches p.58

'I spent a night under a harvest moon of 1939 in Borley Rectory, which is on the Suffolk-Essex border.  It is they say "the most haunted house in England".  The late Mr Harry Price, who was the Honorary Secretary of the Psychical Research Society [no he wasn't], wrote a book about it under that title.  They will tell you that an uneasy spirit throws things about in the rectory.  Doors open and shut.  Footsteps ring where no feet walk.  Bloody fingermarks appear, suddenly, on the dining-room walls, oozing blood. [I've read a lot about Borley this year and I've not come across a single report of this phenomenon.]  And there are one or two lighter sides.
Some years ago Borley Rectory was burnt out.
I went into the roofless room, taking a friend and a double-barrelled gun.  We found no bloody fingerprints downstairs.  We stood at the foot of the staircase and looked up it to a landing and passage where wallpaper flickered in  tattered streamers and the moon made shifting shadows.
"Let's go upstairs" I suggested to my friend, who is young and a soldier.  He shuddered.
"Not for anything."  There's Something up the top of those stairs.  it's watching us.  I can feel It.  I can damn nearly see It - huge and black.  Something squatting. "
I raised my gun.
"Come outside" he said.  "For God's sake, don't shoot.  I don't like it.  In any case, you'll fetch the neighbours, and we shall get into trouble for being here.
Now there are no neighbours near to Borley Rectory, but an old empty church and a farmhouse.  But we went outside.  We stood under a tree in the bright moon and looked at the black, staring, empty windows of the house that no one could live in for long.  And Something seemed to be watching us, malevolently, from those eyeless windows.
Then it shot between my legs.  I felt its harsh bristles, its snaky undulating muscles.  It was a black cat.  It went into the house with a bound.  And it did not come out again.
Now one can put what construction one likes on that.  Harvest mice are the likeliest.  But when, a year later, I met a man whose London newspaper had sent him to spend an inquisitive night at Borley he said:
"I wouldn't go up those stairs for a fortune in the dark.  There's Something very odd in the upper regions.  I stood outside and watched the house - and do you know a damn great black cat came between my legs like a bullet and went into the house like a shot out of a gun.  It never came out again.  And when I asked at the farm they said they had no black cats.  No one round there has a black cat.  But anyone who stands in that garden at night always [always??] sees that cat go into the house.  It's a spook!  That's what I think."
So do I.'

Another unreliable ghost 'researcher' Elliott O'Donnell has been honoured with a biography this year by Richard Whittington Egan that I must get round to reading at some point.
Posted by Antony Clayton at Thursday, September 08, 2016