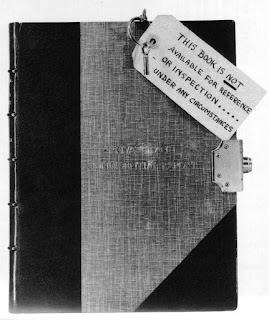 A website set up by the adopted son of Marianne Foyster about Borley Rectory which I thought had been taken down seems to have recently reappeared.  See here.  It has some very useful resources, especially the scans of Sidney Glanville's Locked Book containing material from the period when Harry Price rented the rectory and installed a changing team of observers - notably he himself only visited on rare occasions.  I notice from a quick perusal of the contents that the Rev Guy Eric Smith and his wife Mabel returned to Borley to stay a night in the company of Glanville in January 1938.  Nothing happened.  This incident is recorded in the chronology section of The Borley Rectory Companion, but I am not aware of it being mentioned in the rest of the Borley literature.  Smith's letter to Glanville a few days later implies that strange things did occur during their time residing at the rectory 1928/9, but it's revealing that he puts 'spooks' in inverted commas, as many writers maintain that he and his wife never believed in ghosts.  See here.

There is a very good and detailed review of Borley Rectory: the Final Analysis by Andrew Clarke writer of the excellent Bones of Borley website - a book I reviewed with similar conclusions in an earlier post.  The response of the author and publisher to Clarke's review is most revealing.
Posted by Antony Clayton at Sunday, November 27, 2016