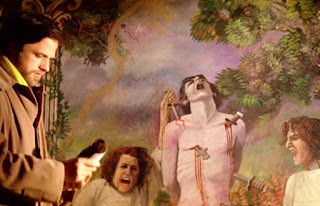 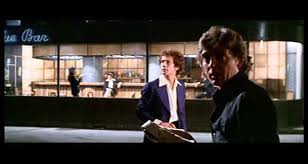 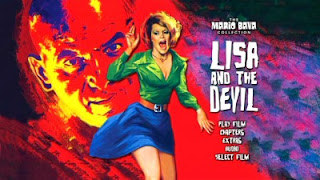 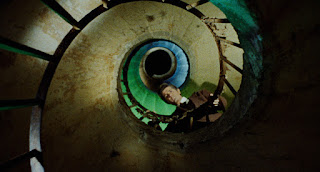 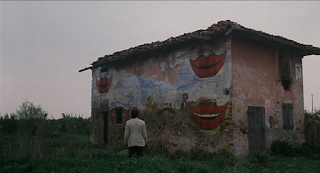 To see in the New Year I've been watching a selection of Italian horror and 'giallo' films - the latter graphically violent films from the early 1970s - the genre name originating from the yellow covers of the crime novels by which they were influenced.  Interestingly, from my point of view, I couldn't help noticing that they many of them shared the theme of a mural which held an important clue to the plot of the film.

One of the best was Lisa and the Devil directed by Mario Bava (I've seen a number of his films this year, including the seminal Black Sunday available in a Blu Ray release with I Vampyri, the first Italian post-war horror - the genre had been banned under Mussolini).  Elke Sommer plays a tourist on a tour of Toledo who gets separated from her group in the narrow canyon-like streets of the medieval town and enters a dreamscape of murder orchestrated by the Devil, played with relish by Telly Savalas (Sommer's character had seen his image previously in a local mural). Trivia fans may care to note that he sucks a lollipop throughout the film, but this is prior to its iconic appearance in Kojak; apparently he and Bava came up with the idea and he later added it as an essential prop to his television portrayal of the New York cop that secured him worldwide fame.  Another point of personal interest is that Bava was keen on the old secret tunnel, especially one that leads to a large ornate fireplace. Beautifully filmed and dripping in atmosphere, Lisa and the Devil is an oneiric, almost surreal experience but was not a financial success.

Producer Alfredo Leone had invested a lot of money and decided that he didn't want to lose it and so recalled Elke Sommer and filmed new sequences for which the old film would provide flashbacks.  Cashing in (literally) on the recent massive success and notoriety of William Friedken's The Exorcist, this remodelled movie was entitled House of Exorcism and on the recent Blu Ray release you have the opportunity to view it together with Lisa and the Devil.  I found it a nonsensical desecration of a beautiful film - Bava's name does not appear as the director - I watched it while listening to Leone's commentary - he still thinks he did a good job.  It's nevertheless worth watching, as some scenes from Lisa and the Devil are more graphic and sexually explicit and had obviously been cut from the original film.

I've now also seen Bava's 1966 Operazione Paura (cornily retitled in English Kill, Baby ... Kill), generally reckoned to be his best and I think I preferred it a little over Lisa and the Devil.  It's a great film, again beautifully photographed, with a real dreamlike quality and surreal scenes such as the hero endlessly running on a loop through the same room until he catches up with himself.  The sinister young girl at the centre of the mystery was actually played by a boy (how useful these DVD extras are) in a blond wig, an early example of the 'creepy/killer kid' found in many later horror films.  Coincidentally, the camp boyfriend of one of the central characters in Profondo Rosso was played by a young woman.  The simple but highly effective use of a bouncing ball to signal her presence was used by a number of subsequent filmmakers (including Fellini) as one of the extra films on the Blu Ray demonstrates, although they left out the one that sticks most clearly in my mind - a scene in Marathon Man, where a ball bounces menacingly down a dark arcade.

Another giallo, The House with Laughing Windows had a great sense of atmosphere which builds up as a restorer uncovers more than he intended to when working on a mural of the martyrdom of St Sebastian in the local church of an isolated Italian town.  Follow the link to an absorbing online essay on the iconography of St Sebastian, whose arrow-ridden body is ubiquitous in Italian churches and galleries - while in Genoa a few years ago I saw an exhibition solely devoted to Guido Reni's depiction of the martyred saint.

Profondo Rosso, which I also saw, was filmed in Turin and I remember walking along the magnificent arcades that feature heavily in the film and standing by the large reclining river statue that is the central focus of a beautifully framed scene.  The location is the Piazza CLN, built during the Fascist period, see here.  The scenes here also clearly reference Edward Hopper's famous painting Nighthawks.  The Blu Ray release has a very absorbing film studies essay on Profondo Rosso and other Argento gialli such as The Bird With Crystal Plumage.  Obviously the incidental music provided by Italian prog rockers Goblin contributes greatly to the film.

Incidentally, I also watched the recent Blu Ray release of Friedkin's Sorcerer.  Brilliantly filmed with some memorable moments - the lunar landscape at the end of the journey for example and the laborious progress of a truck laden with nitro glycerine over a rickety bridge.  But it took a long time to get to the central story - the introductions of the four major male characters were fascinating but could have made separate films in themselves.   Crucially, I didn't actually find it that tense - I recall seeing Wages of Fear (on which it's based) on television decades ago as a boy and feeling really tense, which I didn't with this film.   The score by Tangerine Dream is recommended. The DVD has an interview with an entertaining Friedkin by Nicolas Winding Refn which is definitely worth seeing - Friedkin emphasises that films are dreams, a point brilliantly demonstrated by Mario Bava.
Posted by Antony Clayton at Friday, January 12, 2018