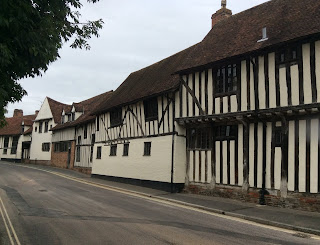 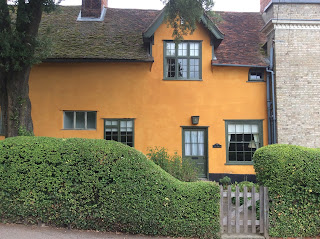 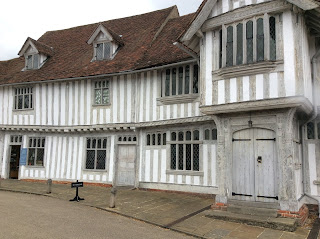 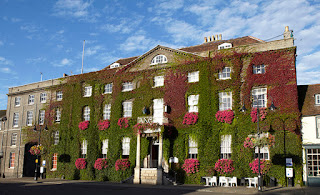 A busy summer school holidays now having finished, I hope to write up some information about a few of the places we visited in England and Wales of relevance to this blog.

Firstly, Lavenham in Suffolk, a very pretty village with a wealth of timber-framed buildings - famous in Folk Horror circles as a location in Witchfinder General see here.

Lavenham appears in Secret Tunnels of England: Folklore and Fact and during our visit I took some photos of some of the buildings mentioned in the text:

'The beautifully preserved medieval wool town of Lavenham in Suffolk includes many half-timbered houses such as the rambling block of buildings in Water Street known as the Priory. Originally the property of the Benedictine Colne Priory at Earls Colne, Essex, the building, which began as a thirteenth-century hall house, has a blocked-up doorway in the cellar leading to a culvert, probably used for the dyeing of wool. According to a local guidebook: 'on the opposite side of this is a corresponding doorway of a subterranean passage leading towards Lady Street (there is authenticated proof of this).' The lavish brochure for the present-day 'boutique accommodation' says 'It is rumoured that there is a secret underground passageway connecting Lavenham Priory to the Swan Hotel, which was built during the Reformation.'

Facing onto Lady Street, The Grove is a timber-framed house with a Georgian front and gardens that stretch back to Barn Street. It was in the gardens that: ' a Roman bath or crypt was discovered and evidence of an underground passage leading from the splendid building on the Barn Street side of the Grove garden towards the Guildhall was also found.' The Guildhall is a sixteenth-century timber-framed building founded by the local wool guild and later used as a bridewell and workhouse; today it is a National Trust property.

On the corner of Water Street and High Street stands the Swan Hotel with the old Wool Hall now incorporated into it. In the fourteenth-century cellars there is said to be a blocked entrance to a passage that runs along under the road.'

Little Hall, Lavenham, is also worth visiting (no secret tunnel) - see here - a 14th century house with plenty of atmosphere, used as a kind of artist's hostel during the middle years of the last century by the Gayer-Anderson brothers who amassed an eclectic collection on antiques, pictures, books and Egyptian artefacts including the famous Bastet Cat Goddess, now in the British Museum.

We also visited Bury St Edmunds, home to one of the 'vanishing fiddler' tales popular in that part of the country.

'In Bury St Edmunds, a number of buildings have been incorporated over the years into the ruins of the great Benedictine abbey, once among the richest in Europe. On Angel Hill, the Angel Inn, now the Angel Hotel - built in 1779 on the site of three adjoining inns, The Angel (build in 1452), The Castle and The White Bear - sits on arched vaults that date back to the thirteenth century.  Tunnels are said to honeycomb Angel Hill and local legend connects them with Maud Carew, a nun alleged to have poisoned Humphrey, Duke of Gloucester (1390-1447), who was arrested on his arrival in Bury St Edmunds on 18 February 1447 and died on 25th of that month. Her ghost, seen as a 'Grey Lady', 'still patrols the buildings, passing in and out of the walls with celebrated abandon.' The legendary tunnels are very likely remnants of the abbey's drainage system. Once more we hear of a bold fiddler being  the only person willing to enter the tunnel under the Angel, being followed on his subterranean journey by a crowd listening to the slowly fading music that suddenly ceases, with no subsequent sign of the fiddler - 'probably he was instantly suffocated by some unwholesome vapours that he there met with.'

Photos above of Lavenham Priory, The Grove and The Guildhall in Lavenham taken by me, Angel Hotel in Bury St Edmunds (not by me).