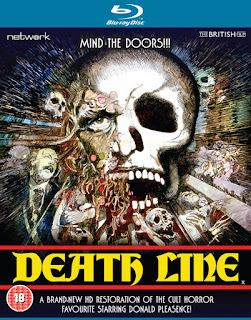 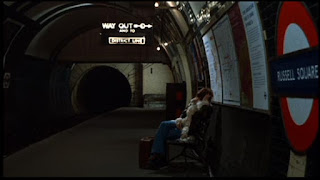 Death Line was released on Blu-ray a few weeks ago and I finally got round to watching it last night. Many years ago I watched a much-degraded video where the many underground scenes were too murky to see much of the action - that was the only version I had seen up till now.

The new disc is very clear and highlights the impressive long tracking shot where 'The Man's' lair is revealed in all its horror. Interesting to think that this film was released (1972) before The Texas Chainsaw Massacre and its ilk. Rather than being a monster movie the film elicits some sympathy for the deformed and cannibalistic man trapped in London's underground, mainly through the performance of Hugh Armstrong (there's an interview with him as a bonus).

As ever, I'm always interested in the locations. It soon becomes clear that the film was not made at Russell Square station, where mysterious disappearances take place, but at Aldwych - a prominent sign points to the District Line (see still above) which doesn't connect with Russell Square on the Piccadilly (this must have meant a walk to nearby Temple station).

The exterior of Russell Square was used and many of the interiors (police station, student flat) were filmed at Battersea Arts Centre (an interesting snippet of local information for someone who lived close by). The bookshop and the appealing-looking pub have not been located - the director Gary Sherman thinks that the pub was in Battersea but has since been demolished. The scene inside the pub appears improvised and I later read an interview with Donald Pleasence (who really steals the film despite a short cameo from Christopher Lee) confirming that the dialogue - including British film stalwart Norman Rossington - was totally improvised and they were actually drunk at the time.

Some very thorough location research can be found here. My suspicions that some of the underground scenes were filmed at Bishopsgate Goods Yard in Shoreditch (in recent years an interesting indoor market and now extensively redeveloped) proved well founded. This is the area that stands for Museum station in the film - cut off by a tunnel collapse in the late nineteenth century and now the lair of The Man. See the British Museum Station Spectre posts below for the film's part in subterranean London folklore.
Posted by Antony Clayton at Thursday, October 04, 2018