Comus, The Unthanks and Trembling Bells 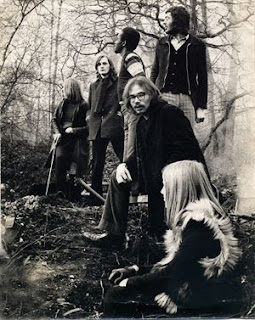 Some activity on the 'folk' music front recently: went to see Trembling Bells and The Unthanks at the De La Warr Pavilion on 20 March. The former have a female singer with a beautiful clear voice and a guitarist who plays outside the normal folk parameters - songs were a bit samey though. The Unthanks were as desolately atmospheric as ever, much expanded from the previous time I had seen them, with a string section and additional musicians. Highlights for me were an extremely disturbing song by Alex Glasgow called something like 'Close the coalhouse door', which would put Nick Cave to shame and a surprising cover of possibly my favourite King Crimson track 'Starless' (without the incredibly controlled guitar solo of course, probably one of Fripp's simplest, but most effective).

Comus playing last Saturday night at the Borderline were an intriguing proposition: split since 1972 and recently reforming owing to their steadily building legend (the internet plays a big part in these reunions I feel) based almost exclusively on their debut First Utterance; pretty much all the original members are in the present band. The rekindled interest lies in the unusually intense vocals of Roger Wootton and the unusual subject matter of the songs: mental illness, murder, paganism etc. They played the songs I was familiar with from the first lp plus some new material - one new song with a heavy breathing backing was really impressive. Female singer Bobbie Watson was not only stunningly well preserved but could also still hit all the high notes on The Herald. The crowd were hysterical and a surprising mixture of ages - some had clearly travelled a long way to be there. One problem with these reformations is recapturing the intensity of early recordings when mental states, living circumstances, emotional tensions, were often wildly different.

They were part of the 'legendary' Sixties Beckenham Arts Lab, which also spawned one David Bowie - apparently they also supported him in the early days. I had to leave before the encore to get back to the seaside, but it had been an interesting evening. At the beginning of procedings some ancient footage of the Incredible String Band was played on a screen at the back of the stage.

Young support band Diagonal were very good, channelling Hawkwind, Gong, Van der Graaf Generator and other classic prog acts and it wasn't embarrassing - they even (mostly) had the requisite amount of long hair and beards - the guitarist resembled the young Daevid Allen. They played for nearly an hour and only managed to get through four 'songs' - brilliant.
Posted by Antony Clayton at Wednesday, April 06, 2011