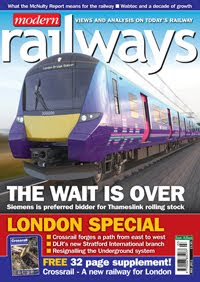 The July issue of Modern Railways has a very useful supplement on Crossrail with maps and computer-generated images of the finished stations - still in the shops.

Plans for HS2 are not being universally welcomed. Proposals to dig a tunnel at a depth of 30-35 metres beneath parts of north Westminster have met some opposition from local residents. Recently the Stop the Tunnel North Westminster action group protested outside City Hall against the potential disruption works would cause in the area, noise from the tunnel and the plan to build a huge ventilation shaft in Queen's Park. Personally, I'm not sure that the expense, disruption and journey time saved will be worth it - isn't 1 hour 20 minutes a fast enough time to get from Euston to Birmingham? The case against is put here.