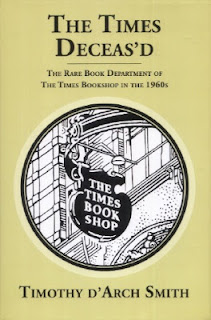 Last week at a book launch in London I had the pleasure of chatting to Timothy d'Arch Smith, author, bibliographer and antiquarian bookseller.  Amongst his works are the erudite and entertaining occultist Books of the Beast (Mandrake) and an autobiographical volume The Times Deceas'd (Weiser Antiquarian) about his time at Foyle's and the Times Bookshop, formerly located in Wigmore Street (it disappeared in the late 1960s). As well as praising my most recent book he also mentioned another interesting character who lived not so far from Hastings, Cyril Scott, whom I'd not encountered before.

I thought I would reproduce a short extract from his account of working in the book trade to give you a taste of the joys within; it deals with a couple of 'Uranians' who are included in my own Decadent London.

'Anthony d'Offay, an enterprising undergraduate at Edinburgh University, had acquired the library of the nineties poet, John Gray and of his friend, Marc-Andre Raffalovich.  This he had done in very simple fashion by knocking on the door of the monastery where the books were housed and offering money for them.  In common with many decadent writers, Gray had converted or, to put it in a less charitable light, subverted - part and parcel of a general wilfullness exhibited by this literary movement - to the Church of Rome.  In contrast to many of his fellow writers, he did not die young.  He and his rich friend 'settled down'.  Gray became a priest.  Their pooled libraries, moved about from cure to cure, ended up in Edinburgh where they had been bequeathed to the Dominican order.  Raffalovich's books all had his bookplate, or rather one of two bookplates, a pictorial label of fin-de-siecle design executed by the psychic artist Austin Osman Spare; and for books of a homosexual nature - plenty of those - an Eric Gill woodcut of a serpent wound in a knot: perhaps a lover's knot to add to symbolism already heavily-handedly ratified.  We had acquired at Sotheby's a copy of John Gray's Silverpoints (1893), the special vellum-bound issue, which set off the association copies bought from D'Offay for our second catalogue.  D'Offay produced his own catalogue of the more important books from the Gray/Raffalovitch menage adorned with a cover photograph of the young Andre Raffalovich which bore striking resemblances to the young Anthony D'Offay.  Already hankering after a career in pictures instead of in books, D'Offay jobbed off to us his entire stock over the next few years, among which remained a sprinkling of the Gray/Raffalovich treasure-trove.' [p.44]

For more on John Gray see In the Dorian Mode: a Life of John Gray by Brocard Sewell.

D'Offay, of course, went on to become a major art dealer - I was a regular visitor to his gallery, just south of Oxford Street, in the 1980s and 1990s - it closed in 2002.  The Times Deceas'd is written in a delightfully orotund style that had me occasionally reaching for the dictionary, one obscure adjective also reminded me of my favourite name for the publishing house of my last work - Callipygous Press - that had to be abandoned in favour of Accumulator.