Dance Till the Stars Come Down 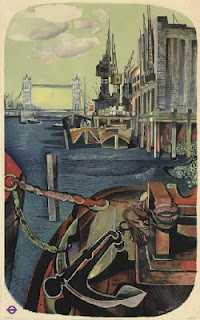 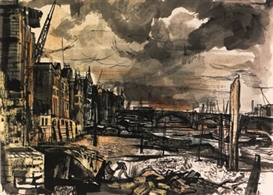 Having recently acquired a drawing by John Minton (1917-1957) I read his biography by Frances Spalding Dance Till the Stars Come Down.  A good friend of Michael Ayrton (see earlier post) this talented painter, illustrator, stage designer and teacher seems to have suffered from manic depression: he took his own life on 20th January 1957.  He was homosexual and a heavy drinker and hung out with the usual Soho & Fitzrovia suspects: the two Roberts, Bacon, Freud etc and shared a studio with Keith Vaughan.  For me, some of his most evocative works are his Thames dockside pictures, when it was still a working port and not an investment opportunity.  Here's a passage he wrote about this favourite subject:

'I do not think the initial stimulus to paint is necessarily visual.  For instance, a ship's siren is one of the most potent sounds I know, arousing a whole series of images.  Awakening the particular grey sadness of the docks, the dark enormous ships and cold chill wind shuddering over the sea, the cranes drawn slenderly intricate and black upon the steel sky; amongst the small shapes of painted colour, the vivid orange, rust red, white and cobalt, or again, the high still skies of midsummer, the warehouses sharp and square in the honey-coloured sun, and the quietness of ships glittering across the pale horizontal water; where occasionally a small figure moves and is still again.  The flags hanging limp; afternoon; nostalgia for distant cities and landscapes of the world.'  [Spalding p.103]
Posted by Antony Clayton at Thursday, January 31, 2013