All the Devils are Here 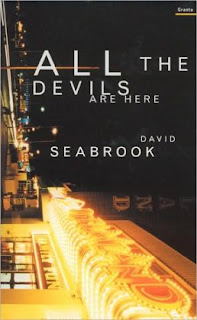 Today reread All the Devils are Here by David Seabrook, first read on publication 2002.  It's a kind of sleazier, more prurient version of Sebald's The Rings of Saturn with north-east Kent substituting for Suffolk.  Very well written and entertaining, covering many areas of interest including Margate: TS Eliot; Rochester & Chatham: Charles Dickens, Richard Dadd; Ramsgate & Broadstairs: John Buchan, various British fascists; Deal: Charles Hawtrey, Freddie Mills, Richard Arne and a number of gay men who retired there (mainly because of the close proximity of the Royal Marines School of Music).  I did think of moving to Deal about ten years ago (not for that reason!) but the trains to London were ridiculously slow (improved now by a Javelin service).  Count Stenbock even manages to put in a brief appearance and whatever could a 'map of Ireland' be sexual slang for?  The answer may lie here.

An obsessive interest in the Freddie Mills murder resulted in Seabrook's next book Jack of Jumps about the bizarre unsolved 'Jack the Stripper' murders in the 1960s, which I haven't read but which received criticism for its unsympathetic portrayal of the female victims; Cathy Unsworth wrote a much more sympathetic novel about the case: Bad Penny Blues - because, she told me, she didn't like Seabrook's book.  In All the Devils are Here Seabrook is an unreliable narrator, whose sexuality is unclear - he seems to have been a rather strange and lonely character.   In 2009 this expert on the works of Marcel Proust was found dead in his flat in Canterbury aged 48, probably of a heart attack, although there were rumours (very unlikely) that he was murdered.
Posted by Antony Clayton at Thursday, March 21, 2013