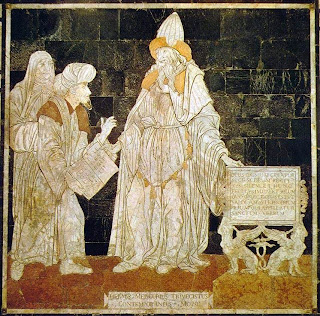 The reference to Hermes Trismegistus reminded me of a couple of visits I've made to the Duomo in Siena.  Not only does it contain one of the most magnificent frescoed libraries in Europe - the Piccolomini Library decorated by Pinturicchio (probably my favourite example of Renaissance decoration) - but also boasts an ornate marble pavement that includes an image of the great Magus (see above).  As Yates outlines in her book, during the Renaissance Hermes Trismegistus was thought to have been the author of the Hermetic writings believed to date to the ancient Egyptians; eminent Fathers of the Church such as Lactantius and Augustine had earlier added their own imprimatur to the texts' antiquity.  In fact they were probably written in the second to third centuries AD.

Therefore the Renaissance Magus 'was not returning to an Egyptian wisdom, not much later than the wisdom of the Hebrew patriarchs and prophets, and much earlier than Plato and the other philosophers of Greek antiquity, who had all - so the Renaissance Magus firmly believed - drunk from its sacred fountain.  He is returning to the pagan background of early Christianity, to that religion of the world, strongly tinged with magic and oriental influences, which was the gnostic version of Greek philosophy, and the refuge of weary pagans seeking an answer to life's problems other than that offered by their contemporaries, the early Christians.' (Yates p.2)

And from the sublime to the ridiculous: a personal prog rock fave of mine is by Todd Rundgren's Utopia at the peak of their bombast - it's called Mr Triscuits.  Not the version on Another Live but the longer more far out one that can be found on the bootleg Nimbus Thitherward taken from a 1975 BBC radio broadcast that well and truly blew my teenage mind when I first heard it.  As Todd announces before they play it, the original title was The Emerald Tablet of Hermes Trismegistus.
Posted by Antony Clayton at Thursday, November 14, 2013