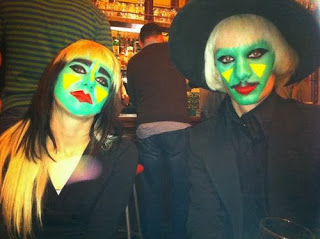 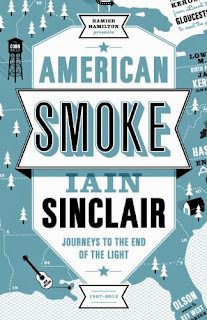 Last Thursday to Brighton to meet up with Gwilym Games (Machenalia editor for The Friends of Arthur Machen) and various guests of the World Fantasy Convention in the Victorian-flavoured Cricketers pub.  Friday in London, at the invitation of a friend, went to Soho's Alleycat Bar to see a couple of youngish groups I knew nothing about: Six Years - Post Punk with a drum machine, very much in thrall to The Au Pairs and Delta Five-type early 80s female-fronted bands and yet when I mentioned this to the singer/guitarist she'd never heard of them - and Psycho Delia a riot grrl style, White Stripes lite, drummer and singer/guitarist with a lot of ferocious energy and a nice line in see-through white body stockings (pic above).

Saturday to The Beacon in Hastings to hear Iain Sinclair read from his latest book and recite some poetry.  He was accompanied through some of this by top sax man John  Harle (a noted composer in his own right, he's also played with the likes of Elvis Costello) and some ambient laptop soundscapes.  American Smoke is Sinclair's homage to the Beats who he has long admired and been influenced by - I purchased a signed copy and have been reading it.  I have to confess I find him less convincing when sundered from his Hackney/Spitalfields haunts but, as he himself admits, he's pretty much exhausted this ground.  The evening was part of the admirable Black Huts festival put on by St Leonards poet and publisher Nicholas Johnson who I briefly talked with at the end.