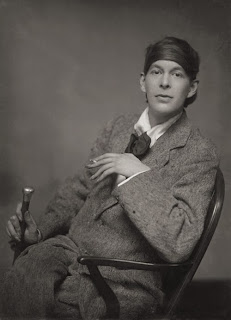 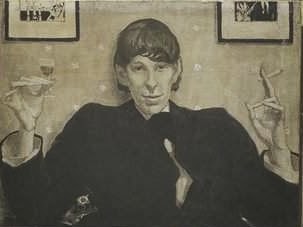 This week I ordered a copy of The Life and Work of Alan Odle by Martin Steenson which tells you most of what you need to know about this interesting if fairly obscure artist.  I'm glad I found it, as I was thinking of doing a similar book myself - abandoned project No.57.  I do agree with the review that can be found here, however: after a pretty thorough bibliography of his work in books and periodicals there's very little information about the final illustrations - are they all in the collections of Terry Gilliam, Jeremy Hulme and Victor Arwas?  We're not told.  I see that Victor Arwas died in 2010.

Some years ago, searching around for a cover image for my Decadent London book I found the above picture in a history of the Cafe Royal and the search was over.  Many people think that it's a portrait of Aubrey Beardsley (or even the result of an incestuous relationship between Beardsley and his sister Mabel!) but it is in fact Odle, painted by his friend Adrian Allinson (if I recall correctly, the original is now missing, but the V&A has a photograph, hence the sepia tones).  I'm not sure that I care for a lot of his art, I prefer the earlier illustrations but he seems to have suffered many disappointments and setbacks in his life.  He was married to the Modernist writer Dorothy Richardson, whose reputation, unlike her husband's, grew after her death.  She writes that she was glad that he predeceased her, as he appears to have been almost hopeless at coping with everyday life; in earlier years he led a life of ceaseless dissipation, mostly within the comfortable environs of the Cafe Royal.  In a letter to his brother he wrote 'You know the old man's allowance won't run to Cafe Royal evenings and fires.  Necessities come first so, I do without fires.'  He also collaborated with Clifford Bax (friend of Aleister Crowley - see his memoirs Some I Knew Well) and Austin Osman Spare on the periodical The Golden Hind.
Posted by Antony Clayton at Thursday, December 05, 2013