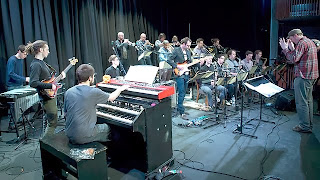 Various concerts over the last month or so:

The Fall at Clapham Grand 15th November.  Probably would have been better if it had been louder, from my perspective on the side I couldn't hear it properly - the mosh pit in the centre seemed to be having fun.  MES possibly the happiest I have ever seen him onstage - new ep track The Remainderer was aired plus a pretty shambolic oldie 15 Ways.  Alright, but I have much fonder memories of the Islington concert last year - far better venue for a start, where you could see and hear well from anywhere.

Christian Scott Ronnie Scotts 20th November.  I was really looking forward to this.  I still find the idea of eating a meal while listening to live music a bit strange, but the young bankers and legal professionals around me seemed perfectly at home.  Scott was with a quartet (no piano) but fortunately had his guitarist Matt Stevens onboard.  Stevens was more noodly Methenyesque with a much cleaner sound than on the records but certainly doesn't run down the usual worn grooves; then Scott announced that the guitarist was leaving to form his own band, which will be quite a loss I think and it seemed that Scott felt the same.  He spent quite a lot of the evening telling us what he thought - it took up way too much time in my opinion - how much he loved his wife (who came on to sing a number) and making numerous humorous observations.  The first set was a bit of a disappointment to me and it was only in the second that the group came alive and played with more bite and heaviosity, Stevens finally started using distortion - Jihad Joe and KKPD stood out.  I agree with this review that if more of this type of music could have been played I'd have enjoyed it more.

Troyk-estra Purcell Room 23rd November.  The best of the bunch - I've written about Troyka before (see earlier post) so it was interesting to see them in a much augmented line up.  The music was dense, constantly changing, but with a great rock and funk groove on most numbers.  This review and this one chime with my thoughts (a number of people walked out, always a good sign I feel) - Chris Montague is a very interesting guitarist and Kit Downes is certainly one to watch -  he works in many different ensembles and plays solo piano  - Joshua Blackmore the drummer's pretty good too and contributed my favourite piece Zebra (alternative anagrammatic title Braze).   The sound was excellent and I had a great view from the fourth row - the cd of the band live at the Cheltenham Jazz Festival this year was available and is recommended.

Wooden Shjips Audio Brighton 9th December.  I had high hopes for this concert but they were marred by the very poor venue.  Firstly, I can't have been the only person to go to the wrong club Haunt, as most of the publicity said the gig was taking place there.  Fortunately Audio wasn't far away along the seafront - but what a badly designed club for live music!  The stage was along the side wall past the entrance and the crowd was bunched in front of it meaning that anyone else coming in afterwards had to stand at the side with minimal view and the prospect of having to push through a very densely packed group of people to reach the toilets stranded on the far side of the room - combined with one of the most bored and surly barmaids I've encountered for a long time (not enough bar staff certainly) it wasn't a great experience.  However the music, what I could hear of it (once again it wasn't loud enough), but was probably good for the people directly facing the stage, was hypnotic and entrancing - as with any group I haven't seen before I don't prowl the internet for a preview - heavy psychedelic fuzzed drone influenced by the VU with hints of Suicide, Felt even, and most of all Spacemen 3 I thought.  They plough a very narrow repetitive furrow, but they do it well.  At the gigs you can buy the latest lp Back to Land on lovely pink vinyl with a far-out sleeve modelled on Led Zeppelin 3 and the 13th Floor Elevators artwork.
Posted by Antony Clayton at Thursday, December 12, 2013