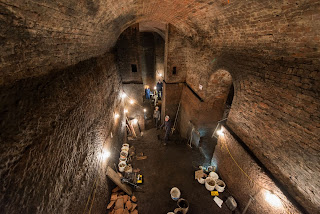 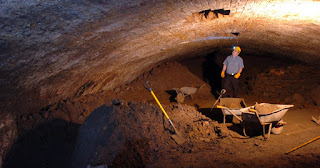 As we were in Liverpool last Thursday, we took the opportunity to visit Williamson's Tunnels.  Only a fairly small, but representative, section has been opened up by hard-working volunteers for guided tours, but it's well worth visiting.  Undocumented, the reason for their construction is still unknown - probably to provide work for soldiers returned from the Napoleonic Wars? - and there was no map drawn at the time to show their locations.  Joseph Williamson was a wealthy and eccentric character, who went hunting on his wedding day and spent much of his time planning his tunnel empire.  They are mentioned in Secret Tunnels of England as an example of underground structures that were forgotten in the ensuing years, or not even known about while they were being constructed.  It seems that the latest research has revealed that many of the tunnels were arched-over former quarries, rather than being burrowed out through the sandstone beds.  The website for the Williamson Tunnels Heritage Centre is here.  A useful pamphlet published by the Joseph Williamson Society is The Life of Joseph Williamson by David Bridson.
Posted by Antony Clayton at Thursday, February 25, 2016