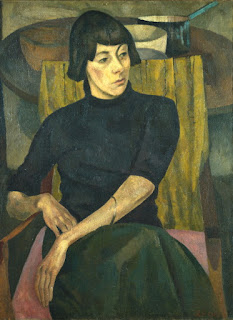 Just before Christmas I bought another addition to the Art Collection, a drawing of a boxing match by Nina Hamnett, a Bohemian artist, born in Wales, who thrived in the Twenties and went into a slow alcoholic decline from the Thirties onward, culminating in a nasty death in 1956 - probably suicide, although not proven.  I've been reading my copy of Denise Hooker's Nina Hamnett Queen of Bohemia (which I've only just noticed has been inscribed by the author).  It's well written and illustrated and tells you all you need to know.  Portrait by Roger Fry (one of her many lovers) above.

Hamnett wrote two volumes of autobiography, the most celebrated of which is Laughing Torso (Constable, 1932), which became the subject of a widely publicised libel case courtesy of our old friend Aleister Crowley, who hoped to make some money out of it.  Hamnett had included a section on the Abbey of Thelema at Cefalu in Sicily (I took some exterior photos there a few years ago, see earlier post) where she says, 'He was supposed to practice Black Magic there, and one day a baby was  said to have disappeared mysteriously.  There was also a goat there.'  Crowley claimed that he only performed White Magic.  During the course of the trial Crowley used a suitable analogy, in terms of this post, when describing different forms of magic: 'In boxing you can fight according to Queensberry rules or you can do the other thing.'  'Does that mean', counsel for Constable interposed, 'that his definition of Black Magic is the same as all-in wrestling?'  The judge eventually delivered a damning verdict on the Great Beast: 'I have never heard such dreadful and horrible, blasphemous and abominable stuff as that which has been produced by a man who describes himself as the greatest living poet.'  Crowley lost.

Learning that a friend had arranged  an exhibition at the Claridge Gallery in Brook Street, opening on 13 April 1926, Hamnett returned from an extended period in Paris to live in the very heart of Fitzrovia.  'Nina stayed in the cheap and friendly Hotel de l’Etoile in [30] Charlotte Street, where there were three or four bedrooms above the restaurant, and the French atmosphere and petit dejeuner softened the blow of returning to England.’ (Hooker p.173).  The restaurant remains a renowned dining destination.

Hamnett became interested in boxing in the second half of the Twenties, which makes me think that this drawing dates from the period 1926-30.  Her entrance to this new world was gained after meeting a young boxer called Vernon Campbell at the Fitzroy Tavern.  He took her to a bout at the Comrade's Hall in Camden Town where she was delighted by the 'atmosphere of crude good humour and bawdy repartee'.

Hooker p.190: 'The promoter Johnny Hughes, an ex-flyweight champion, gave Nina a free pass and she took to going to Camden Town every week to draw, relieved to have found a way of killing the boredom of dreary Sunday afternoons, which always held a special horror for her.  Nina quickly got to know the other regulars and when Campbell boxed she joined in the crowd of supporters cheering and shouting "Come on Vernon!"  Sometimes Nina and Campbell went to the big fights at Premierland Olympia and the Albert Hall.  He also took her to Professor Newton's famous Academy of Boxing, off the Edgware Road, where she met the young boxers and drew them while they trained.  The professor took a great liking to Nina and obligingly demonstrated the complexities of right hooks and upper cuts along with the rest of the boxing repertoire so that she became something of an expert on the finer points of the sport.  Nina liked to air her knowledge to her friends and took large parties of up to fifteen people, which often included the poet Roy Campbell, to the Comrade's Hall, "basking in their clamour as if she were the entrepreneur of the event".  After the matches at Camden Town - and later at the Charlton [sic] Ring, Euston - Nina and her friends would bring the heroes of the afternoon back to her room, where they drank tea and beer until the pubs opened.  Nina did many drawings at the matches, some of which were included in the deluxe edition of Laughing Torso [I'll have to track this down] and she also persuaded some of the boxers to pose for her at home.'

My drawing must have been done at one of these bouts.  As it was the major London boxing venue, there's a good deal of information about The Ring in Blackfriars Road (over the Thames in Southwark, bombed in the Blitz, commemorated by a pub today).  Hamnett produced a number of works depicting fights there including The Ring at Blackfriars (watercolour) - sold by Sotheby's in 2002 see here (reproduced above).  There's very little information online about the the Comrade's Hall and the Drill Hall in Camden Town and Chalton Ring (the correct spelling) in Somers Town.  Chalton Street is a long road that runs pretty much the central length of Somers Town, at that time it was a predominantly working class district - suffering extensive damage in World War Two thanks to the three major main line stations close by - and was massively rebuilt in the 1960s and 1970s, mostly with council flats.

The reverse of the work is also of interest and the next post will be about that.
Posted by Antony Clayton at Thursday, February 23, 2017

I work at Charleston, home of the Bloomsbury group in Sussex between 1916-1978. We are in the planning stages of an exhibition focusing on Nina Hamnett's life and work. We would like to include this piece in the show. If you would be interested in lending to our exhibition please get in contact with me by email on e.hill@charleston.org.uk