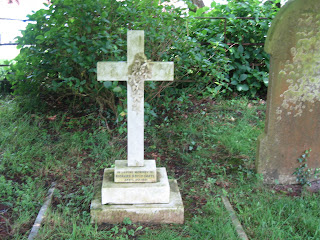 Today, as the weather was sunny, I undertook my first ‘proper’ walk of the year, from Fairlight village through Fire Hills and Hastings Country Park back to my house. An amusing incident occurred on the journey to Fairlight when the inevitable bus-borne alcoholic dropped his can of beer, which exploded and soaked most of the pensioners at the front - he didn’t bother apologising.
On an earlier visit to the church of St Andrews Fairlight (the tower can be seen from many miles around and can be climbed on certain days) I had made an interesting Decadent London-related discovery: in the graveyard can be found the burial place of Richard D’Oyly Carte (1844-1901) theatre impresario well known for staging Gilbert and Sullivan’s most famous works under the auspices of Mr R. D’Oyly Carte’s Opera Company. My photo of the grave above.
He also commissioned the construction of the Savoy Theatre, the first public building in the world to be lit by electricity; it opened on 10 October 1881. On that day Patience, G & S’s satire of the aesthetic movement, moved to the Savoy from the Opera Comique, where it had debuted on 23 April 1881. The character Bunthorne has been taken to be based on Oscar Wilde, but initially was probably modelled on Swinburne and Rossetti. D’Oyly Carte managed Wilde’s American lecture tour in 1882. His Savoy Hotel next door to the theatre opened in 1889 – it was recently reopened after a huge refurbishment programme.
Posted by Antony Clayton at Thursday, March 03, 2011