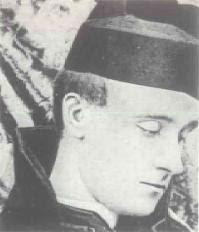 Many years ago, when I worked in a public library in Kensington a peculiar man, frequently clad in lederhosen, would come in and chat with the male workers and request a series of arcane (for me at the time) books – most of them eventually had to be acquired from the British Library and other specialist sources. One author whose name I remember cropping up many times was Frederick Rolfe, also known as Baron Corvo; I didn’t have a clue who he was.


Decades passed before I was recommended to read the classic ‘experiment in biography’ The Quest for Corvo by A J A Symons, which through a series of epistolary investigations and personal interviews with those who had met him, paints a portrait of a strange, obsessive, difficult, pedantic and ultimately lonely individual who spent many years in poverty writing numerous books and articles which were pretty much ignored in his day. It is also interesting to discover how he was befriended on many occasions, mostly by members of the closely closeted homosexual community of the period (by reading between the lines of The Quest) and managed to turn any potential friend into a ruthless enemy – in his own mind at least. His perverse behaviour was to be his fatal flaw.

One of the most fascinating parts of Symons’s book is the examination of how Corvo’s reputation grew after his death, until he inspired a collector’s cult, for which any scrap of paper or jotting had immense value. The collective name for his writings and memorabilia is known amongst bibliophiles as Corviana – Donald Weeks, an especially obsessive collector and biographer died in 2004; his collection eventually was given to Leeds University. The fate of various Corvo texts has also inspired a huge amount of detective work and manuscripts once thought lost forever have been rediscovered by diligent, truffle-hunting researchers.

Personally I find Rolfe’s writing difficult to take in large doses – he revels in language but also loves to invent new words, which always annoys this reader, whoever does it. I also read his autobiographical novel Nicholas Crabbe last week, again I find the obsessive tone wearying, but it provides a useful insight into his dealings with important publishers of the late 19th and early 20th centuries such as John Lane and Grant Richards.
Posted by Antony Clayton at Saturday, March 26, 2011