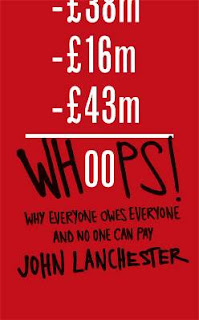 Just completed Whoops! by John Lanchester, an idiot's guide to an idiotic financial system which many of us shall be bailing out for the foreseeable future while the people responsible for the recent disasters pocket large bonuses and generous pensions. In 200 pages Lanchester manages to explain, even to finance ignoramuses such as myself, the ‘flaw in the model that I perceived is the critical functioning structure that defines how the world works’, in the words of Alan Greenspan, the man in charge of US financial policy (and disciple of dodgy ‘philosopher’ Ayn Rand) during the crucial years.

In a nutshell Lanchester believes that the credit crunch, ‘was based on a climate (the post-Cold War victory of free-market capitalism), a problem (the sub-prime mortgages), a mistake (the mathematical models of risk) and a failure, that of the regulators.’ He describes in damning detail the origins of the crisis in a quasi-religious, self-deluding belief amongst financial ‘experts’ and governments such as those in the US, UK, Ireland, Iceland and Spain in ‘the market’ and its miraculous self-regulating properties, coupled with newly minted financial instruments such as CDOs (collateralized default swaps) CDSs (credit default swaps), which few fully understood but in which many bankers had blind unswerving belief, especially when they were earning them huge salaries and bonuses. This money-making edifice was built on foundations so shaky and insubstantial that most intelligent outsiders, had they been properly informed of the nature of these transactions, could have predicted a disaster waiting to happen – a few astute bankers and journalists did, but they were ignored or shouted down by the true believers. In the US in particular outright fraud was perpetrated by the likes of Enron and Bernard Madoff.

Over here the inevitably dire outcome was not helped by a housing-price bubble that was bound to burst hyped up by hours and hours of daily gung-ho television programmes telling us we were stupid not to be buying up properties to rent out, or purchase a couple of extra houses to do-up and sell for a massive profit; these shows seem strangely to have diminished in number now. He also points out that Britain has half the total European credit-card debt.

For those put off by the finance jargon of the first five chapters, the final two chapters of the book could be read on their own as they encapsulate the central problems of the whole enterprise. This is pretty much summed up in the section quoted below [from pp187-188]:

‘Mrs Thatcher began, and Labour continued, a switch towards an economy that was reliant on financial services, at the expense of other areas of society. One can disagree…with that policy, but what was equally damaging for Britain was the hegemony of economic, or quasi-economic thinking. The economic metaphor came to be applied to every aspect of modern life, especially the areas where it simply didn’t belong. In fields such as education, equality of opportunity, health, employees’ rights, the social contract and culture, the first conversation to happen should be about values and principles; then you have the conversation about costs, and what you as a society can afford. In Britain for the last twenty to thirty years that has all been the wrong way round. There was a kind of reverse takeover, in which City values came to dominate the whole of British life. There needs to be a general acceptance that the model has failed. The brakes-off, deregulate or die, privatise or stagnate, lunch if for wimps, greed is good, what’s good for the financial sector is good for the economy model; the sack the bottom 10 per cent, bonus-driven, if you can’t measure it it isn’t real model which spread from the City to government and from there through the whole culture, in which the idea of value has gradually faded to be replaced by the idea of price.’

No lessons appear to have been learned from the recent debacle. In The Quiet Coup, Simon Johnson, formerly chief economist of the IMF recorded that as part of his work he had, ‘acquired an extensive experience of countries which had effectively been captured by a ruling elite who governed entirely in their own interests. His startling conclusion about the current crisis is that the US has become one of those countries.’ Given the number of millionaires and ex-public schoolboys in the current cabinet, the same conclusion might be drawn about our own present situation.