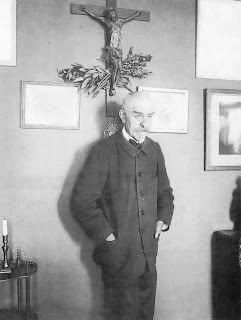 This week I finally got round to reading La Bas by J K Huysmans (the Dedalus 2001 edition, it was first published in France in 1891) - what a great book. It's notorious for the depiction of a Black Mass, but the descriptions of the sadisitic excesses of Gilles de Rais - the subject of a biography by the main character Durtal - are equally graphic and disturbing. The translation by Brendan King is excellent and gives the book a very modern sensibility of cynicism and ennui - as Huysmans says, 'There's only one reason for literature to exist, to save those that write it from the tedium of living.' The book can also serve as a guide to the mentalities of the period, when Sar Peladan revived the Rosicrucians and all kinds of religious eccentrics, quacks and charlatans were abroad. Again Huysmans observes, 'At the precise moment Positivism reaches its height, mysticism awakes and a mania for the occult begins'.


I intend to read some more of his oeuvre, starting with En Rade (available from Dedalus); he was also a formidable art critic. His most famous work is A Rebours, translated as Against the Grain or Against Nature, a remarkable book, totally without a plot, consisting of a series of erudite heightened descriptions of the methods used by a wealthy aesthete to cut himself off from consensus reality - you will either love it or hate it - I had trouble getting through the whole thing last time I read it, although I think it is highly relevant in the age of 'virtual reality' and estrangement from the natural world. Arthur Symons called it 'the breviary of the Decadence' and it appears anonymously in Wilde's The Picture of Dorian Gray. After having written it Huysmans was told by his friend Barbey D'Aurevilly that he would have to choose 'between the barrel of a revolver or the foot of the cross' - he chose the latter course, as his later novels testify.


There's a very comprehensive site on Huysmans here.
Posted by Antony Clayton at Saturday, May 07, 2011