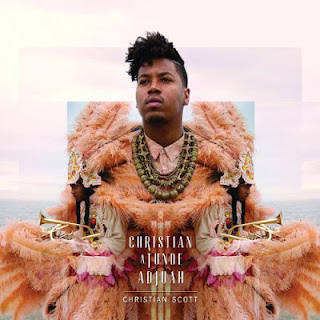 For what it's worth, here's some of the music I enjoyed this year, most of it even came out in 2012, which makes a nice change.

Written using 'a new harmonic convention I call the Forecasting Cell' Scott has produced an endlessly fascinating double cd of jazz trumpet with a healthy injection of rock guitar and hip hop beats - fusion for the twenty-first century.  Special mention for the inventive guitar work of Matthew Stevens.  According to Scott in his pretentious liner essay: 'A Forecasting Cell is a harmonic convention that illuminates the end result of a harmonic sentence preceding its resolution.  Because the end result of a harmonic sentence is already outlined, the improviser and accompanist are coerced into a constant reevaluation of the topography of the harmonic/melodic landscape, ultimately resulting in the improviser being forced to question before he renders a verdict.'  Whatever, every time I listen I hear something new.

The mantle of Guided by Voices' Robert Pollard has been successfully passed on.

Heavy metal, prog, psych, jazz, orchestral and chamber music, it's all here in a wildly ambitious concept album based on the voyage of a ship, or something or other.  Moments of longeurs on the second cd (the whole thing could be about 20 minutes shorter, a common fault these days), but the first cd is a thrilling ride from start to finish - not keen on the compressed-sounding vocals though.

Yet another massively long double cd this is the culmination of everything Swans have been working towards for the last 30 years.

One of my top five records, we've been waiting a long time for the reissues promised around the time of the reunion concerts - an immersive experience in sound.

Innovative and influential music that I discovered courtesy of The Freak Zone - must have been in the late Pete Namlook's record collection and Ryan Beano was also listening in.

Can  The Lost Tapes box set  Some fascinating stuff on here some of it very ahead of its time.

Le Orme Felona e Sorona  Again purchased in Bologna. As usual with Italian prog I prefer the Italian language version (rather than the Anglicized Peter Hammill version).  A couple of weeks after buying this I had a conversation with a young Italian waiter at a West End wine bar who was raving about it.