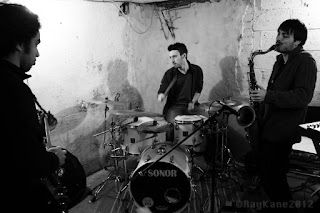 To Islington Assembly Hall last Thursday to see The Fall.  On the train I was wondering to myself: why do I keep going to see this group?  Maybe this should be the last time; it's a habit I should break.  One terrific show later I remembered why I've been following this group since 1980.  Mark E Smith proved once again that he doesn't intend his group to be a heritage act regurgitating the 'hits'.  I thought they were more punky and garagey tonight, the band as tight as the proverbial sexual metaphor and MES on good form despite repairing to a comfy chair behind the amps now and again - at least he didn't walk off stage as he frequently tends to do.  I couldn't help laughing at the end when he tried to untangle a microphone from the mass of wires and mike stands that had accumulated at the front of the stage.  Great venue with friendly staff and very nice toilets for a rock gig - these are the things that concern the middle-aged fan these days.  A couple of equally positive reviews here and here.

Monday to Brighton Kommedia to see The Roller Trio.  Compact studio space and exhilarating support from Physics House Band who I'd read about in a Brighton music mag, but wasn't expecting to see: they looked barely out of their teens and played the kind of unselfconscious instrumental prog rock that would have been anathema a few years back.  Three hugely proficient musicians (the guitarist and bassist both double on keyboards) taking everything at lightning speed - great fun.  The Roller Trio never really fully took off for me, but they certainly create an interesting sound and I'd go and see them again if they played locally.  I was annoyed by the number of people around me talking as the set neared its conclusion and I had to rush for the train.
Posted by Antony Clayton at Wednesday, December 12, 2012