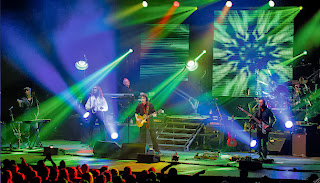 To the Albert Hall last Thursday to see Steve Hackett's Genesis Revisited.  I'd ummed and ahhed for months about going - I'd heard the first Genesis Revisited cd and thought it was appalling:  unwisely added new vocals and no improvement on the originals, to my mind.  I haven't heard vol.2 and have no intention of doing so, but...maybe this might be the last time I'd hear music from the period 1972-78 performed by someone from the group, as it seems extremely unlikely and indeed redundant for Genesis to reform now (Phil Collins has retired anyway).  I was one of the many thousands who endured the waterlogged conditions at the Milton Keynes Bowl to witness the final time that Peter Gabriel played with them in 1982 (he was brought onto the stage in a coffin).

As I'd hesitated for so long about going to the Albert Hall and only bought a ticket a week before the show I ended up with a Gallery standing ticket.  As it turned out this was an advantage as there were only about 20 of us in the vast seatless, stratospheric space and you could wander around from one vantage point to another and enjoy the show in complete isolation, rather than being stuck in the crowded, cramped-looking seating below.  One fired-up chap was making the most of it, running around and bellowing along - but he was easily avoided.  The lighting looked good from up there too.  The audience was all too obviously what would be expected, although there was a smattering of younger people and even some women.

Musically the show was impressive, although most of the songs had been rawked up, which worked for some but detracted from others.  The low point of this came when the guest guitarist (whose name I didn't catch) scrawled some HM noodling over Return of the Giant Hogweed to its detriment.  Looking at setlists for earlier shows it seems that a much larger section of The Lamb was played - instead of The Lamia and The Chamber of 32 Doors we got some extra Nursery Cryme tracks - the aforesaid Hogweed and one of my personal favourites The Fountain of Salmacis, which sounded huge in the vast hall.  Another highlight was The Musical Box from the same lp, which really benefitted from the heavier, rockier sound - one of many standing ovations.  This concert was surprisingly loud, much louder than I remember the original group's gigs being.

Other highlights: Firth of Fifth with John Wetton singing, Ripples sung by Amanda Lehmann and of course Supper's Ready that finished the set before the encores.  Steve Hackett stood and played almost continuously for two and a half hours, quite a feat for a man in his sixties with music of this complexity.  As far as the other musicians on stage - and basically this was a high-class tribute act - Lee Pomeroy deserves extra praise for excellent work on guitars (double-necked natch), bass and pedals.  I was expecting to find Nad Sylvan's singing jarring but it worked pretty well, apart again from a few 'rock vocal' flourishes.  I missed some of the subtle power of Phil Collins' (and Chester Thompson's) playing on the drums, which were the weakest point in my opinion.  Nevertheless I think any fan from that period would have gone home pleased - I shall now resist going to any further Genesis-related concerts.  Coming up:  The Fall, Christian Scott, Troykestra and Wooden Shjips.
Posted by Antony Clayton at Thursday, October 31, 2013