Daughter at the De La Warr 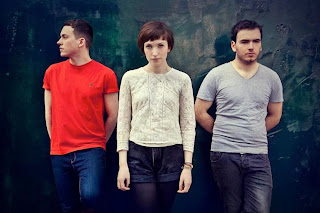 To Bexhill last week to see Daughter - I'd heard one track on 6 Music which I liked and thought I'd take a punt.  Show sold out - in fact whole tour sold out!  Very enthusiastic audience of all ages - I was by no means the oldest - plenty of teenagers, one or two of whom recognized my wife as their former teacher.  Missed support Indians to watch the full moon make a corridor of light across the Channel from the balcony outside.  Daughter were good, played well and were received rapturously - not sure about the crowd-pleasing Daft Punk encore.  I bought the cd (on 4AD, which I thought had disappeared years ago, home in the 80s to many of my favourite musicians and based very close to my birthplace).  I've not seen a group change guitars so many times since the days of the likes of Steve Howe and his racks of instruments.  Definite shoegazing tropes (fine by me) and a hint of Sigur Ros with the bowed guitar - the biggest influence on the sound as far as I was concerned was early Verve (when they were still interesting, before the addition of the definite article), especially the crystalline guitar arpeggios - and her voice still reminds me of someone, who I can't pin down - such are the impressions nowadays of concerts when I feel that I've heard all the music, good as it may be, somewhere before.
Posted by Antony Clayton at Tuesday, October 22, 2013